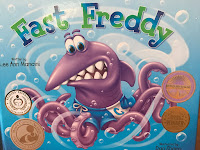 If you joined us from the Christian Children's Author's blog, welcome!
Fast Freddy soon realizes his greatest fear on his first day at his new school. Everyone notices he's different. With the help of his teacher, Miss Mermaid, and the janitor, Mr. Seahorse, the other students soon learn that teamwork helps turn everyone's differences (especially Fast Freddy's) into great strengths.
Read more »
Posted by Dawn Aldrich at 9:00 AM No comments:

After a week of spiritual awakening the enemy sought to anesthetize me. Sitting around the campfire listening to stories of God's movement in the lives of my peers, I knew God had challenged me, too. He asked me to pick a side; His or the enemy's.

You see, on the outside it appeared I was on God's team, but I held secrets behind closed doors; secrets that I'd never admit to anyone except my future husband. They were free-will liberties I regularly practiced. It was those secret liberties God asked me to lay down at the cross. And, it was those very same things the enemy used to accuse me that night.
Read more »
Posted by Dawn Aldrich at 3:00 PM No comments:

My youngest granddaughter looked up at me between bites of pizza and asked: "Who's Jesus, Grams?" followed by, "Can I see him? Can I talk to him?"


The Apostle Paul did say we should always be ready to give an answer for our faith, right? But when I read that passage I never thought about the Littles in my life asking those faith-based questions.
This recent conversation brought me back to this article I posted two years ago for when Littles ask big questions:

Read more »
Posted by Dawn Aldrich at 8:47 AM No comments: