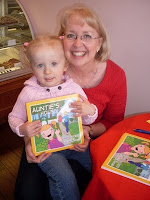 "When he has brought out all his own, he goes on ahead of them, and they follow him because they know his voice." John 10:4
Tomorrow I will have come full circle as I celebrate the one year anniversary of my children's book, "Auntie's House" by reading it at the CT Loves to Read Day in Waterbury, Connecticut for the second year in a row. As exciting as it is to see my book come alive in the eyes of children who listen to it for the very first time, it's time to move forward.
Continuing to revel in the magic of this year, without moving forward, would only be to pat myself on the back and point people to what I did, instead of using the gift God's given me to journey to the next step, the next level, especially in my writing and say "Look at what God is doing!"
I've been struggling with the next step as the doors God's opened are not what I expected at all. There's been a lot of distractions (good and bad) that have slowed me down since the fall and made me reassess my situation. Against all logic, I've slowed down just a bit to pursue God's voice and to make time to write again. Some say it's crazy while others call it discipline. I'd rather call it obedience. Discipline relies on my own will and my own pursuits. Obedience is aligning my will with God's and moving in His direction. Discipline comes in making sure I really save the time to write and not waste my time running unnecessary errands or doing unnecessary chores.
As I've slowed down, I must admit there have been days when I've felt pretty stupid! Why? Because I'm not hearing God clearly. I don't know which story to write. On the one hand, I have a sweet children's story that fell in my lap while on vacation down south last summer. You would think I could just spit it out but, until tonight I couldn't get past the first few paragraphs. On the other hand, I have three chapters of an adult, nonfiction book ready for rewrite. I've recently received some great critiques on these chapters so a rewrite should come easily. But, it hasn't. This one's tougher because it's personal, takes more thought, more time, more solitude.
Here's the deal. Until I hear God say "Stop!" I've decided to write in both genres. I've just got to get these stories out of my head and onto paper if for the mere fact that I can stop talking about them in the future tense. I think it's crazy but no matter which direction I take, I see people that God has put in place to help me navigate through these waters. I think He's just asking me to set sail.
Today I finally got to work and sailed past my "writer's block" with my children's book. At least now I'm past the beginning and wondering how to end it rather than how to begin. I took my own advice..."Writing a book is as easy as telling a story and everyone has a story to tell." Just tell the story and worry about the rest later.
So, Happy Birthday to "Auntie's House", my first born. Here's to moving forward!
Posted by Dawn Aldrich at 9:23 PM