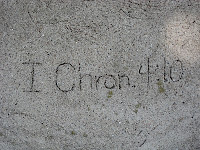 "Jabez cried out to the God of Israel, 'Oh that you would bless me and enlarge my territory! Let your hand be with me, and keep me from harm so that I will be free from pain.' And God granted his request." 1 Chronicles 4:10
For the first decade of our lives we seemed to be in such want. At least that's how I viewed our life, anyway. We always seemed to have one emergency or another to handle and it seemed we were always gasping to keep our heads above water. I remember many tears and clenched fists raised toward heaven asking when the blessing would come to us. When would it be our turn to have? When would we be able to say we lived on Easy Street? Why was life so terribly hard? Why was it so painful to just live a normal life? Why were all our efforts for nothing?
Then God introduced us to the prayer of Jabez.
The name Jabez means pain. In ancient times a person's name signified a parent's dream for their child or defined their character, physical appearance or circumstance into which they were born. For Jabez, his birth caused his mother great pain. But to the writer of Chronicles, Jabez had grown to be a man "more honorable than his brothers" (vs 9). Somehow, he'd overcome his label of pain to become a man of honor.
At first glance his one-lined prayer seems to be a request for the greater "things" in life without effort on his part; almost treating God like a jeanie in a bottle who is suppose to grant his every wish. In searching the commentaries on this verse however, this man Jabez was asking God for something different and in the humblest of ways.
Biblical blessing is not the receiving of material things, per say. When Jabez asked for God's blessing he was throwing his life wide open to the will and ways of God, submitting his will to all that God had in store for him wherever that meant he should go or to whom he should go (enlarge my territory of influence). Asking for God's blessing in our lives then, should not be a grocery list of items to stuff into our already affluent lives but a humble request to allow God His way with us; to invite God's supernatural means to supersede our weaknesses for His glory in our circumstances or with those He puts in our lives.
Okay, so how does that apply to our family cornerstone? We submit our will to God's, step out in boldness and take risks. We've learned that when God says "move" we step out in faith toward Him without hesitation and when he says "stop" we stop. It's a life within the posture of true worship. He blesses the heart of obedience that is turned toward Him, always.
Jabez continues his short prayer asking that God's hand be on him. The biblical definition of God's hand being on someone/some place was to signify God's presence and power throughout that person or place. When God enlarges our sphere of influence the task before us can be daunting, overwhelming, unmanageable. Like Jabez, we cannot do life within our own strength. It's not all about us but all about God's power through us.
He concludes his prayer by asking God to keep him from harm. Some texts interpret harm as evil. It doesn't take long when you're walking in true obedience to God's truth to realize that life gets more difficult. Just as much as God's eyes go back and forth in the whole earth, searching for those whose hearts are turned toward Him, so too, our enemy, Satan, prowls around the obedient seeking to destroy and kill. Life is a battle fought in the spiritual realm but sometimes we get caught in the middle. When that happens, like Jabez, we need to ask God to fight the battle, keep us from the harm of our Enemy...so that we will be free from pain.
We've been married over 2 1/2 decades now. There are still times of great want. There are still family crises that overwhelm us. But this is what we've learned: to live our lives unselfishly submitted to God, to seek God's face in prayer over everything, to live by faith which means stepping out in obedience with great boldness, to identify the Enemy's battles and let God fight them, and in everything...give thanks.
Posted by Dawn Aldrich at 1:49 PM