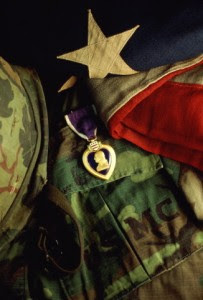 "He has sent me to bind up the brokenhearted, to proclaim freedom for the captives and release from darkness for the prisoners." Isaiah 61:1

Today we honor our American veterans of war. We say thank you to those brave men and women who have and are still defending our freedoms and the place we call home. We pay tribute to those who have paid the ultimate price on our behalf.

I cannot imagine the sacrifice the families of veterans have made. I've lived mostly in a time of peace. I remember listening to war stories from my father, my father-in-law and uncles, but they were unharmed and my husband and my son have both escaped war. I remember holding my young son in my arms during the first Gulf War thanking God he was too young to serve. I cried just imagining the heart-wrenching worry of watching him go into battle, knowing he was taking the hits, putting his life on the line. I couldn't imagine the grief of losing one so precious. So, I thank those mothers and fathers who have freely given their sons for me and my family.

Freedom is not free, they say. It never has been.

Isaiah prophesied of the One who would come to heal the brokenhearted, proclaim freedom for the captives and to release the prisoners from darkness. That One was Jesus. Through his ultimate sacrifice, his death...he took our sins that held us captive of the Enemy in darkness. Through his resurrection, he gave us freedom and life eternal if we believe in Him.

Thank you, God for your ultimate sacrifice of your Son, Jesus. Thank you for the freedom, the Light and life eternal because of your Son.
Posted by Dawn Aldrich at 12:33 PM