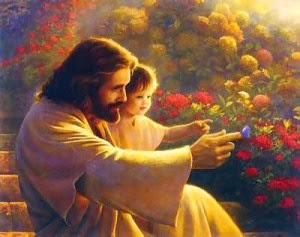 At that time Jesus said, “I praise you, Father, Lord of heaven and earth, because you have hidden these things from the wise and learned, and revealed them to little children. Matthew 11:25

“Where is heaven, Grams?” she asked.

I nearly fell, head first into my car trunk as I neatly packed the grocery sacks, fumbling for just the right words. Her question wasn’t formed from a five-year-olds natural curiosity, but rather her heart’s longing to know Mammie’s new address.

It had been six months since Mammie’s unexpected passing and I’d been expecting this question, but hearing her vocalize it made answering it exceptionally daunting.  I knew my words would matter, because they would influence her hope and faith. I feared getting it all wrong and wondered how to explain what I couldn’t fully grasp myself. What simple, truthful answer could I offer her to this question that stumps even the greatest theologians?

I slammed the trunk shut, the question still hung between us. I swung the empty carriage around and lifted her into the car as I searched for just the right words. I breathed a desperate prayer heavenward, wherever that was, “Lord, I need your words…NOW!”

(Fill your favorite Christmas mug and join me over at the Christian Children's Authors blog for the rest of the story...)
Posted by Dawn Aldrich at 8:00 AM