Hope For a Future 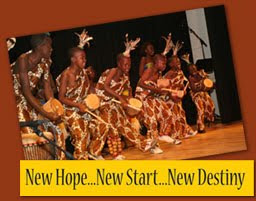 "'For I know the plans I have for you,' declares the Lord, 'plans to prosper you and not to harm you, plans to give you hope and a future.'" Jeremiah 29:11
Opening week of deer hunting season hadn't allowed much time to connect with my husband. So, Saturday as I rode shot-gun in the passenger seat of his truck on our way to the Destiny Africa Children's Choir concert, I started to run through the list of things we needed to talk about.
By the time we arrived at the concert, I was starting to hyperventilate, my heart was heavy, aggravated and worried. When you got right down to it, I wasn't sure God was big enough to handle everything that was on our plate. We took our seats, made small talk with those around us and waited for the show to begin.
Finally, the African drumbeats filled the air. The most beautiful parade of smiles began and the sound of pure joy flooded my ears! With jubilation and glee these children filled the auditorium with hope for the future as they shared their dreams of becoming teachers, doctors, nurses, journalists, aerospace engineers and the president of Uganda!
Each child, from ten to fifteen, had experienced more tragedy than anyone in the room would ever know. All of them were orphans by disease or war but all by death. They witnessed horrible things, unspeakable things. Yet, they were full of joy. They were full of hope. They were full of dreams and they believed in their dreams.
These children had lost everything; suffered much. Yet, through Christ they had everything! Through Christ, everything was possible. How many times had I heard that but really never believed it?
As I sat there, tears flowing uncontrollably from my eyes, I felt ashamed that I had doubted God at all. Who was I to worry about anything? Who was I to think God was too small? Who was I to be burdened...burdened about what? I prayed, "Lord return to me the joy of my salvation! Return to me the joy!"
Tonight, on the eve of my first television interview for my book, "Auntie's House" God has reminded me that I, too had a dream. My heart's desire was to become an author, to spend my days forming words into pictures and speaking hope and encouragement into the hearts of those who needed to hear my message. I never imagined it would take the form of a children's book but, God did. I'm just following His lead.
What greater joy is there than having a dream, a heart's desire and watching God bring it to fruition? What greater hope can you give the world than to show that through Christ, ALL things are possible? Just follow his lead.
Posted by Dawn Aldrich at 8:01 PM