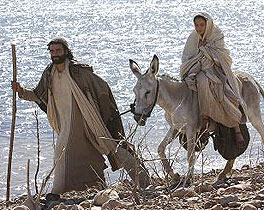 “And so it was, that, while they were there, the days were accomplished that she should be delivered.”
Luke 2:6
I read the verse and had to pause for a second as I thought about what it said.
“…while they were there, the days were accomplished…” So many times I have seen movies or heard narratives about the two weary travelers arriving in Bethlehem, exhausted and worn out from their long journey. Mary, on the verge of giving birth, sits upon the back of a donkey, grimacing in pain as Joseph desperately knocks on door after door only to be turned away with the words, “We have no more rooms!”

With one last final attempt of finding lodging for his laboring wife, Joseph begs an innkeeper for a place to sleep. The innkeeper quietly tells him that they can rest in the stable out back. Joseph gladly accepts and gets his wife settled in. Not too long later, a little baby’s cry pierces the night as baby Jesus takes His first earthly breaths as He makes His bloody and watery entry into this earth.

Taking a look at this verse again, I cannot help but wonder just how long did Mary reside in that stable before actually giving birth to her Son? Assuming hundreds, maybe even thousands of people arrived in Bethlehem around the same time, the tax process would not have been completed overnight with that many people to count. Did Mary and Joseph have to wait in line, day after day, until it was their turn to be counted?

It is only speculation on my part, as with any of these stories that people have written about the birth, seeing that we only know a small part through what the Bible explains to us. Maybe God wanted Mary to learn something while she waited for her little one to arrive. She was already a humble girl, having meekly taken on the task of carrying God’s Son in her womb. She never questioned the angel’s words in any way, only to politely ask “How shall this be seeing I know not a man?” After the angel kindly answered her, Mary’s humble reply clearly said, “I am surrendered to do whatever God wants. My life is His.”

Whether it was that night, a day later, or even a week later when baby Jesus was born, God’s timing was perfect in the arrival of His Son. Everything worked out exactly to God’s plan, and through it all, God taught the chosen mother of His precious Son, that He was in control, and even though the circumstances and place may not have been her first choice, she could trust Him through it all. If she could learn that lesson before the birth, then she would be able to put all the unknowns of the future of this precious Baby at the feet of Jesus’s Father, and trust Him to see her through all the trials that lay ahead which would lead to Jesus’s ultimate reason for even entering the world….the cross.

Cara Simmons is a wife, mother of five, and an author of Christian YA adventure fiction. She's enjoyed writing short stories since childhood and telling them to whomever would listen. From monkey tales to stories of kidnappings, and orphans, Cara wove exciting adventures that thrilled her listeners. In 2007, Halo Publishing International published the first  book of her trilogy, The Orphans of Mordecai's Castle: The Haven followed by book two, The Leviathan in 2009. Her final book is presently in the editing process and Simmons hopes to see it published by the end of 2012. To learn more about Cara and her books click here.