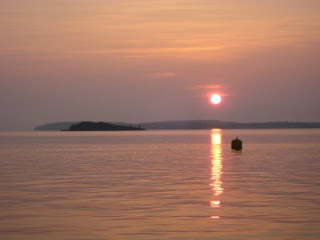 Did you ever watch the movie "The Bucket List" starring Jack Nicholson and Morgan Freeman (2007)? It's about two men in their late 60's or early 70's who are given only months to live. Instead of spending the rest of their time regretting what they hadn't done, they made a list (the "kick the bucket" list) of things they wanted to do before they "kicked the bucket" and did them, together.

Peter & I have such a list. We started it years ago but we call it "Things I Want To Do In My Lifetime." One of our dreams is to road trip and tour all the coastal states of the U. S. We've already been down the southern coastal states to US mile marker 1 South in Key West, Florida. This summer we traveled as close to US mile marker 1 North in Maine before we hit desolation. More than just traveling to that numeric destination, my dream was to watch the sunrise in Eastport, ME where it rises first in the U. S. Here's what happened:

At the furthest northeastern point of the United States all lay quiet and still in the wee hours before daylight. Assured that daybreak would soon arrive, my mind was still restless and worried that this miracle would pass before I awoke. I quietly roused myself from the antique bed twice, hoping not to waken any other lodgers at the bed and breakfast, to check the time and peer out the window toward the eastern sky. I was like a little kid on Christmas Eve, trying to sleep but anxiously waiting for Santa to arrive, hoping not to miss him. Finally, my anticipation was broken by the softest alarm. It was 4:30 am and we had only twenty minutes before the sunrise in Eastport, Maine. "It's a glorious morning!" I said to Peter. "Wake up before we miss it! There's no fog. The sky is pale pink and the sun will greet us. Let's go! I don't want to miss it!"

We quickly threw on our jeans, a sweatshirt and hats. We stepped into our sneaks and tip-toed through the house and out the front door toward the dock across the street. The cold Atlantic sloshed underneath the dock as we disrupted the stillness with our hurried steps. We found our spot amongst the lobster pots and line of anchored boats. Looking out across the horizon was Deer Island and Campobello, Canada. Digital camera in hand, video camera running, hearts pumping, breath-holding we watched in silence until...it came.

It seemed forever yet was only moments as we witnessed a perfectly orchestrated concert before the curtained sky opened and the "star" appeared. Across the glassy, slowly rippling waters a pod of dark gray porpoises promenaded in perfect, arching rhythm along the distant horizon. One, two, three, four...all in turn; always in synch. One at a time or side-by-side they arched in perfect time against the pastel morning sky. They swam off together stage right. What an awesome sight.

On queue, twenty five yards or so in front of us, just beyond the buoys a mighty, arching, water-spouting finback whale surfaces! He arches once, spouts and down again. Then twice and then again and again until he swims off. It was spectacular! It was as though God was announcing the break of day! Our hearts were overwhelmed as we watched in awe of the strength and beauty of this creature that rocked the waters underneath the dock.

As the waters calmed again into a glassy surface we heard a clapping sound, like applause. Peter and I looked at each other like, "What is that noise?" And then a school of herring swam by in a perfect triangular shape, slapping their fins against the surface of the water in front of us. They too exited, stage right and front and center, the sheer, whispy, pastel curtains of the sky parted and the "star" appeared...right on queue! We welcomed it with our own applause and tear streaked faces, praising the Creator for his magnificant show!

We sat on the dock in silence for another half hour just soaking it all in and marveling at the gift God had just given us before we headed back for breakfast. It wasn't until we shared our delights of the morning with the owner of the B & B that we realized what a miracle God had performed that morning...just for us. According to the owner, the morning sky in Eastport, Maine is always foggy. Very, very rarely is there a visible sunrise. Not only that but the natives had not seen fin back whales in their ocean for years. They were afraid they had moved off shore to a more favorable environment or died off. He was encouraged to know we'd seen one.

Leaving the breakfast table that morning, we were again overwhelmed knowing God had given us a precious gift. We felt loved and knew we'd been visited by God himself that quiet morning.
Posted by Dawn Aldrich at 10:10 AM