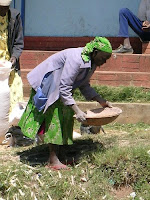 The language of cooking has always amused me. Words like braise, scald, blanche, pouche, fold, cream, sift. They're strange words but they define an exact procedure that when done correctly creates delectible flavors, textures or degrees of done-ness that make you ask for a second helping. I can recall trying to follow recipes when I was first married and skipping over the step of sifting the flour because I didn't have a sifter. In the end the baked goods were delicious so what did it matter if I sifted or not? I finally inherited a small sifter from a family member 10 years ago. That Christmas while making my famous ginger snaps I decided to pull it out of the cupboard and sift my dry ingredients like the recipe had always called for. Not only did the recipe call for sifting but it required that I sift twice. "Wow! Picky!" I thought to myself. "What's so important that you have to sift these ingredients twice?" Well, I decided to sift...twice. The texture of the dry ingredients were finer, lighter and the sugar-topped ginger snaps cracked more evenly and nicely in the end. They tasted about the same (delicious) but I must admit they were lighter.

I ran across the imagery of sifting yesterday in my quiet time. Like 22:31 Jesus is celebrating Passover in the upper room (The Last Supper) with his disciples. Jesus has just admonished them for arguing (again) over who will be known as the greatest in God's kingdom. He stresses the point that the ones who are the least, the ones who serve will be considered the greatest just as He has come to earth to serve and not be served. Then, almost abrubtly, Jesus turns to Peter (Simon) and informs him "Satan has asked to sift you as wheat." The footnote on "you" says the Greek meant the plural form of "you." In other words, all of the disciples will be sifted. Furthermore, Jesus has prayed specifically for Peter and asked that once he has gone through the sifting process that his faith wouldn't fail and that it would be used to strengthen the other disciples.

Above is a photo of a native woman from Kenya, Africa sifting wheat. In ancient times this type of sifter was used to separate the good kernals of wheat from what is called the chaff or the impurities, the waste. What remained was the pure wheat kernal, ready for milling, grinding into flour for baking. In today's terms, prior to stainless steel millers or grinders, (in the days of stone mills) impurities were still present sometimes in the finished product. That's one of the reasons recipes call for sifting; to get rid of the imperfect chaff, impurities. Sifting, I've read, also takes out clumps from the flour settling in storage and also adds air to produce lighter cakes and pastries.

So, when Satan is asking to sift Peter (or us for that fact) I don't think he means for the good to remain. I think he is hoping we get irritated with the process and lose our faith. Jesus, however, allows the sifting of His disciples (including us) for the opposite; to shake us up, loosen the impurities from our lives so that the strong, faithful, wholesome, pure hearts remain. In return, Jesus urges us (as he did Peter) to encourage and strengthen the community of His disciples around us.

Is sifting necessary? In one cooking article I read they say no, it's not necessary BUT it does add quality to your baked goods. Hmmm...how telling! Is the sifting of our lives necessary to Jesus, to His kingdom? No, not really. But, the end result will add quality to our lives. It will remove the clumps from settling too long in our pews and will lighten our hearts from the impurities we tend to collect and hold onto over the course of our daily lives.
Posted by Dawn Aldrich at 1:34 PM