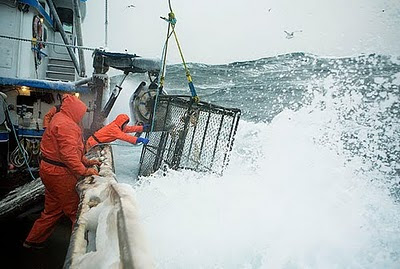 " 'Go away from me, Lord; I am a sinful man!'..."Then Jesus said to Simon, 'Don't be afraid; from now on you will catch men.' So they pulled their boats up on shore, left everything and followed him." Luke 5:8, 10-11
I cannot count how many episodes of The Deadliest Catch I've watched but it's a lot! It's a weekly T. V. series about the adventures and mishaps of crab fishermen on the Bering Sea in winter. Cameras give us a taste of their salty lives from the time they set sail in the icy seas to the day they return to harbor with their boats full of king crab. If I was watching this show in the 1960's I wouldn't understand what they were saying because every word would be bleeped. Their language is as rough as their sea weathered hands and as colorful as a double rainbow. They live hard and work hard. They're passion for the sea, their work, and their crew is unmistakable.
One night after watching an episode, being assaulted by their language, it dawned on me that Jesus chose fishermen to be his closest companions, his first disciples. They didn't choose Jesus. Jesus chose them! It was crude, foul-mouthed, beer-drinking, passionate men like those on The Deadliest Catch that Jesus chose to hang with...all the time! He didn't choose the "perfect, holy men" like the pharisees. He didn't choose the temple priests. He chose the rough-around-the-edges men who embodied boldness and passion! He didn't demand they change their behavior before he asked them to follow him. He took them just the way they were. He saw deep into their hearts, accepted them just the way they were then and there.
I think some of us reverse that in the Church today. We shun the crude, the rough people and thank God we're nothing like "them." We squeeze them out of our circles of influence because they're not holy enough, not clean and white like us. We never ask them to serve in ministries because people might be offended and our own holiness might be misrepresented by their behavior. We insult them, walk away from them, exclude them from our lives because they're not enough like Jesus for our own taste and we certainly don't want to dirty our own white sheets! All this is done under the impression that we're protecting ourselves, our congregations from evil.
We've got it all wrong! In God's eyes we're all rough-around-the-edges people especially those of us who think ourselves holier than our brother! In fact, it's the holy people that God warns us to avoid.
When those Galilean fishermen dropped their nets to follow Jesus they brought their crudeness, their drunkenness, their boldness and passion with them. Jesus loved them because he saw in them who he created them to be and trusted his Father (God) to do the transforming. He didn't squeeze them into a mold of holiness. He allowed them to be who they were in every way and loved them despite their faults. He didn't exclude them from ministry but brought them alongside himself to watch God's work and let that be the catalyst for their heart transformation.
Being a follower of Jesus is NOT about being holy and untouched by the world. To be a follower of Jesus means our lives are messy, our clothes are dirty, our hands are rough but we love, truly love people. We don't take responsibility for their behavior but only our own. We allow God to do the transforming not only in them but especially in our own hearts. Then, and only then, will we be able to call ourselves Christians.
Posted by Dawn Aldrich at 10:43 AM