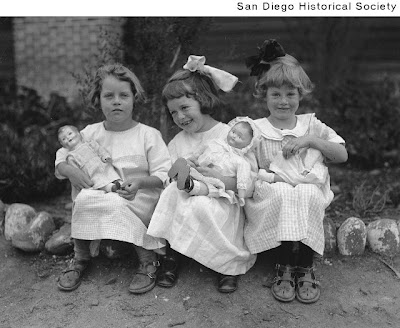 "The Twelve were with him, and also some women who had been cured of evil spirits and diseases: Mary (called Magdalene)... Joanna the wife of Cuza, the manager of Herod's household; Susanna; and many others. These women were helping to support them out of their own means." Luke 8: 1-3

When I was a toddler, if you asked me, "What do you want to be when you grow up?" the answer was always, "A mommy." In fact, my answer never changed throughout my childhood. I spent endless hours with my baby dolls. Dressing them. Rocking them. Singing to them. Feeding them. Changing them. Loving them. I'd talk to them as though they were real. My heart was happy just carrying them around playing "mommy." If truth be told, I played with dolls until I was in middle school. I snuck them into my purse in sixth grade (those were the years before backpacks) and secretly "checked on them" (played with them) during the bus rides to and from school.

By seventh grade, my dolls were packed away in boxes but my heart to nurture remained. So did the question, "What do you want to be when you grow up?" In fact, the older I became the more frequently I answered that question. By the time I graduated high school in the late 1970's, the climbing divorce rate and feminist movement played a significant role in how my answer changed.

My family landed in the pile of divorce statistics of single, working moms and latch key kids. I learned by living my family drama that my nurturing heart may have to settle for being more than "just a mom" because, as I was told, "you never know what life may hand you."

The media screamed of women's rights, equal opportunity, equal pay all around me. If a woman wanted to be a brick layer, then so be it. I scratched my head and wondered, "Why would they WANT to be a brick layer?" My heart kept asking, "What's wrong with wanting to be a mommy?"I learned it was no longer an acceptable answer to that unceasing question so I entered college seeking training for an "acceptable" career.

Jesus started his own feminist movement. To welcome women into his fold of disciples, in a man's world, was breaking barriers ages old. He not only welcomed them but honored them for their support as he and the apostles shared the Gospel from town to town. We're not told exactly what they did but we do know these women supported Jesus and the Twelve "out of their own means." In other words, in whatever way they were gifted to help they offered that as a ministry.

So, how does that fit with my story?

I celebrated my twenty-fifth college anniversary this summer. I'm all grown up with a college degree in communications and christian education but I've enjoyed being a wife and mommy the most. The experiences and friends I've gained from those years are priceless, but to have sought an "acceptable" career rather than what God created me to be was costly. It cost me and my parents a ton of cash. It cost me heartache when I couldn't find success and satisfaction in my jobs. It cost me my health when I wouldn't go where God was leading. It cost me guilt when I enjoyed serving my husband and children full time. It cost me time.

Jesus didn't call all those women into ministry demanding they change how they were. All he asked was they have a repentant heart and follow him. He didn't change who God created them to be instead he called it out of them. Who they were and what they could provide was exactly what Jesus' ministry needed. Who we are as women (homemakers or career women) and what we can give out of our own means is exactly what God needs today.
Posted by Dawn Aldrich at 9:43 AM