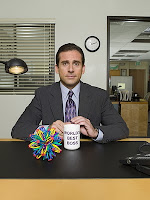 "But say the word, and my servant will be healed. For I myself am a man under authority." Luke 7:7b-8a
In my fourteen years of working outside of the home, only once did I encounter a boss who exuded authority. Certainly, they were individuals who held positions of authority over others but they did not gain the respect of their subordinates as persons with authority. For some, it was because they lacked the experience or education their position required. For others, it was due to poor communication skills. There were those who lacked authority because they were easily intimidated by their subordinates. And even still, those who were so prideful that they showed little respect for either their superiors or their subordinates so their authority was undermined from above and below. How any of these people gained their titles of authority remains a mystery to me even today.
The authority Jesus held was a great mystery to many "holy" people (pharisees) of His day. Maybe because Jesus threatened their position in the church? But, those outside of the Jewish faith "got it." In Luke 7:1-10 we have the story of a Roman centurion (commander) who's servant is sick. He's been watching Jesus and knows He carries the authority of Heaven that will heal his servant. So he sends his servants to ask Jesus a favor. At first glance we think his request is just simply a request for healing but when we look at how he asked Jesus for this healing we get a glimpse at the heart of this man.
We know he's humble because he prefaces his message with "Lord, don't trouble yourself, for I do not deserve to have you come under my roof." In other words, "You're God's son. Who am I to even ask you to enter my home?" Even though he exudes authority because of his post in the Roman guard, he knows that God's authority is even greater.
The centurion has great faith in Jesus' ability to heal his servant, "SAY THE WORD and my servant will be healed..." He aligns his request with his faith. He knows that God's authority through Jesus to heal his servant transcends place and time.
He recognizes from whom Jesus gains authority, "For I, myself am a man under authority..." What the centurion did was not only recognize Jesus' authority but he recognized that Jesus was UNDER authority. God's authority. Not only was Jesus able to restore life and health to those in need but He did so ONLY under the authority and direction of His Father. This statement stops Jesus in his tracks. Jesus turns to the crowd and commends the centurion not only for his faith in Jesus to heal his servant but for understanding where His authority came from.

This is key for those who follow Jesus because Jesus has given us the same authority that God gave Him. "I tell you the truth, anyone who has faith in me will do what I have been doing. He will do even greater things than these, because I am going to the Father. And I will do whatever you ask in my name, so that the Son may bring glory to the Father" (John 12: 12-13).

It's important that we get this right. If we believe we're here on earth for a God-given purpose then we must check our hearts to make sure we are an example of godly authority. People will want to follow someone who is humble, who submits to authority themselves, who commends others for a job well done and who is confident, assured and bold. We need to be God's people that others turn to and say, "Say the word and it will be done." Not for ourselves or our own egos but so others will know that God has worked through us.
Posted by Dawn Aldrich at 8:56 AM