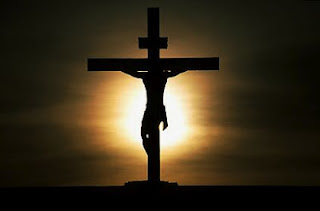 "Jesus said, 'It is finished.'"
John 19:30
"The soldiers led Jesus away into the palace (that is, the Praetorium) and called together the whole company of soldiers. They put a purple robe on him, then twisted together a crown of thorns and set it on him. And they began to call out to him, 'Hail, king of the Jews!' Again and again they struck him on the head with a staff and spit on him. Falling on their knees, they paid homage to him. And when they had mocked him, they took off the purple robe and put his own clothes on him. Then they led him out to crucify him." (Mark 15:16-20)

"'My God, my God, why have you forsaken me? Why are you so far from saving me,
so far from the words of my groaning? O my God, I cry out by day, but you do not answer, by night, and am not silent. Yet you are enthroned as the Holy One; you are the praise of Israel. In you our fathers put their trust; They cried to you and were saved; in you they trusted and were not disappointed.

"But I am a worm and not a man, scorned by men and despised by the people. All who see me mock me; they hurl insults, shaking their heads: 'He trusts in the LORD; let the LORD rescue him. Let him deliver him, since he delights in him.'


"Later, knowing that all was now completed, and so that the Scriptures would be fulfilled, Jesus said, 'I am thirsty.' When he received the drink, Jesus said, 'It is finished.' With that, he bowed his head and gave up his Spirit." (John 19:28,30)
But we know this is not the end of the story....
Posted by Dawn Aldrich at 6:00 AM